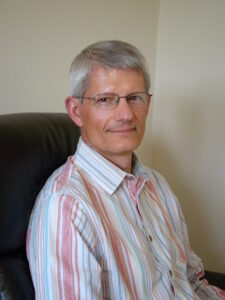 Maybe I was destined to become a writer of some sort or other. One of my earliest memories is being sent to the headmaster’s office at the age of eight to receive a commendation for a comic book I had written. At that age, I thought the only reason to visit the headmaster was for a caning, so the terror of the event has been etched forever into my psyche.

Somehow, I avoided becoming a writer for a further 54 years by working in various office jobs. Nevertheless, during all this time, writing was never far from my attention.  I started, but never finished, many novels. I wrote short stories, created websites and wrote articles for newsletters. In almost every job, I wrote a procedure manual for those who would follow (although whether anybody ever read one of those manuals is unknown).

In my thirties (eek! so long ago now) I almost completed a science-fiction novel, but took so long over it that advances in technology made it redundant.  My abandoned SF novel was not entirely wasted time. It gave me a great deal of enjoyment and I learned valuable lessons—the main one being to know how the story ends (even if it changes in the writing).

Science-fiction is my preferred genre. I believe SF is the purest form of writing (and that is a whole other subject which I might speak more of elsewhere,  although I run the risk of annoying writers in every other genre!)

In 2009, I was living in Ireland. Following the financial crash that brought the country to its knees, I found myself out of work and with a surfeit of spare time. So, began to write a story which had been germinating in my mind for over 30 years. Learning from previous attempts at novels, I spent months plotting, planning and creating spreadsheets listing the characters, scenes and events. An entire wall of my office was covered in post-it notes.

After two years of writing, the 300,000 words that comprise ‘Through The Yellow Death’ were finally published. It could have been the start of a new writing career. However, whilst crafting my first novel, I also trained to become a hypnotherapist and qualified at the same time I published my novel. The business had to come first and shortly thereafter we moved both house and country, so once again writing was prodded back into the cupboard of obscurity.

Although I never promoted ‘Through The Yellow Death’ it accumulated nine customer reviews which averaged 4.8 stars—very encouraging.

Whilst practising hypnotherapy, I wrote and published the book ‘Build A Better You With Self-Hypnosis”

In 2015, I took up the offer of another full-time office job and this took up every second of my time and ounce of my energy for five years.

I always planned to become a full-time author ‘when the time was right’ and that time happened in early 2020. I was stuck at home during the Coronavirus lockdown. There would never be a better time to start writing and, when I started again, I decided I never wanted to stop. It only took a massive global pandemic to prod me into making the career decision that I should have taken over 50 years earlier.

I am very fortunate to live in the beautiful North Devon countryside with my wonderful long-suffering wife and two dogs. I am also blessed with two children who are probably more grown-up than I am.

"A brilliant and well thought out story with deep character backgrounds. This book sends you on an a emotional roller-coaster with the various issues that are faced within the story. The author has clearly spent many hours researching content in this book to create a very real scenario."
Customer Review - Through The Yellow Death
Amazon.co.uk
"Well written book about post-apocalyptic Britain. This is a long one and I thoroughly enjoyed it. The story and characters were intelligently put together and I found it very satisfying to read. I love books of this genre, many are really rubbish but this was certainly not."
Customer Review - Through The Yellow Death
Amazon.co.uk